It's on cold winter nights like this that I like to reminisce of warm days long gone. Way back in June, I spent a day with a group of conservationists on a rattlesnake survey. I know several of these guys well, and got to meet a few of the others for the first time. When I arrived, the rattlesnake crew was just finishing processing a male that they had captured just a few minutes before. 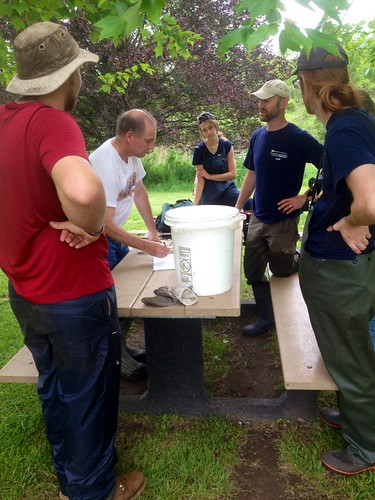 A handsome snake, though exceedingly dark for this location. The snake was measured, weighed, and given a unique identification number as part of an ongoing mark-recapture study on site. After a brief lunch, we set out to another area of the property to walk some upland fields which serve as summer habitat for massasaugas. One field in particular has yielded good numbers of snakes in the past for me over the summer months. And with an overcast sky and temps in the low 70s, I was optimistic about our chances. We split about 10 feet apart, and walked as a group, combing the area for a dark shape coiled amongst the tall grass. It wasn't long before I noticed a freshly shed female try to soak up whatever warmth she could on this overcast day. 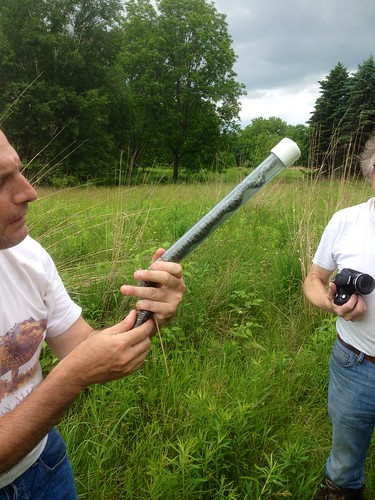 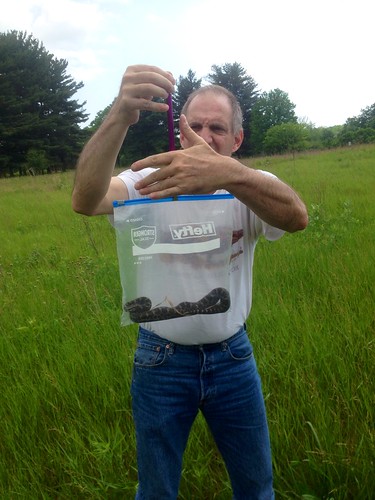 This was a new snake, a young gravid female. Like other captured snakes, data was taken and she was given a unique identification number. She was then released exactly where she was found. The mark-recapture study at this location is part of a much larger habitat restoration project. Population estimates and trends are vital information as the habitat management at this site moves forward.

Though I can't always help out with surveys, I keep my own personal records on massasauga observations, trends, and health of snakes at various locations across southeast Michigan. Changes in numbers of observations or succession of habitats isn't necessarily concrete scientific data, but it is observational data which can help. I'll be sharing some more posts over the course of the winter on massasaugas, particularly from the fall months at a location or two that are pretty incredible, but show signs of trouble from the ever encroaching snake fungal disease (SFD). Until then, keep warm!
Posted by Nick Scobel at 12:28 AM 4 comments:

The warmth has come and gone once again here in Michigan, and winter is slowly beginning to take hold of the Great Lakes region. The winter of 2013-2014 was one for the ages, bringing record breaking snowfall and cold to much of the northern states. But last winter was also a record breaker of a different kind, an invasion of snowy owls in numbers that hadn't seen for more than half a century. Owls invaded much of the Great Lakes basin and along the east coast, making it as far south as a barrier island of the coast of Florida. So one would expect that a spectacle like last year wouldn't be seen for another half century, right? Well, take a look at this map of snowy owl sightings from November to December of this year.


It's quite staggering when you view it from this perspective, hundreds of snowies have been observed in a month and half span. You can also see how much the owls rely on waterways as navigation points, particularly along the Great Lakes coasts, St. Lawrence Seaway, and Atlantic coast. This week, I was able to get out twice to hunt some areas and see what I could observe. When I arrived to a large agricultural area not far from Saginaw Bay, I was astounded by the number of snowy owls in a 8-10 square mile area.

At a rough county, I observed at least 17 different owls in a fairly large area. I'm not sure as to whether this was a group traveling together, loosely at least. Snowies are fairly solitary birds, but it's not uncommon to see them in large clusters in a few square mile area. Either way, it was way more individuals than I observed in a single day all of last winter. 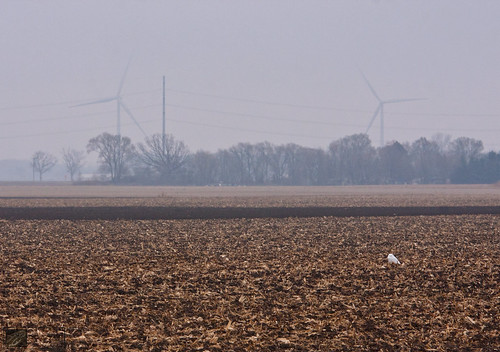 The other thing that I found interesting was the number of adult birds that I observed. Most snowies that irrupt in a given winter are first year immatures which move south to escape the harsh winters of the tundra to hone their hunting skills where prey is less scarce. But I encountered several adult birds, including the stunning adult male shown above. Project SNOWstorm has also had at least two owls that they fitted with radio transmitters last winter return to the east coast this fall. There are a lot of factors that determine the number of snowies that irrupt, but if food is scarce, some adults will even move south. 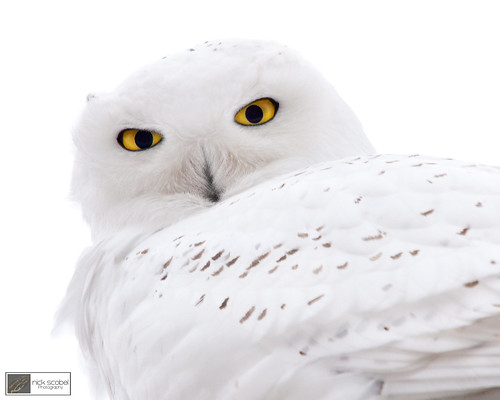 Will the winter of 2014-2015 break the record numbers from last year? Probably not. But it certainly seems as though we are going to get another strong showing of these ghosts of the tundra. Stay tuned.
Posted by Nick Scobel at 1:20 PM No comments:

It's been ages since I've posted a blog, mostly due to a crazy work schedule and lack of internet access while working in the northern lower peninsula. Back in late May, I began working with a state agency on a conservation project involving one of our imperiled turtle species, the wood turtle. While working in the northern reaches of the state, I've managed to see a lot of cool things that we don't often see in the fragmented landscape of southeast Michigan. Without further ado, here's a look at what my summer has been like.

Wood turtles are found in healthy rivers and streams in the northern reaches of the lower peninsula. Most of my summer has involved following these guys around with radio telemetry. They have a knack for moving into really thick cover after nesting finishes, and I've often tracked them into some of the nastiest thickets and thorns I've ever seen in Michigan. Besides the turtles, the vast forests of northern Michigan also house some snake species that seem to be rare or absent from much of southeast Michigan. After a passing thunderstorm one afternoon, I got my first look at a northern Michigan hognose snake. 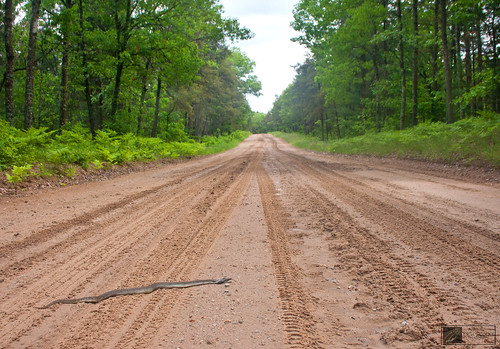 Hogs appear to be fairly common in the northern reaches of the state, I saw more than a dozen in the coming weeks, especially gravid females which were staging in apparent nesting areas. 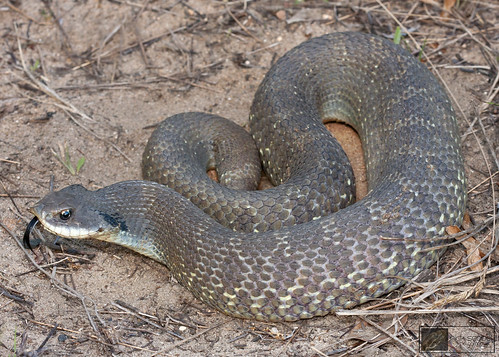 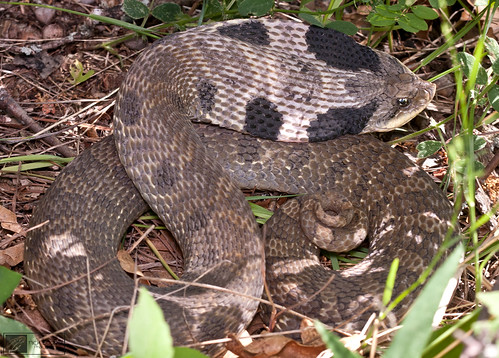 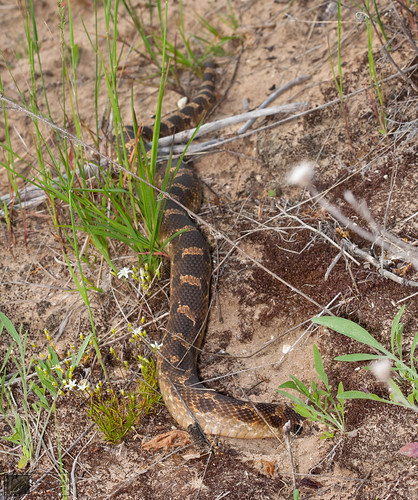 The bird life in this area of the state is also particularly good, especially with the vast jack pine barrens in the area. 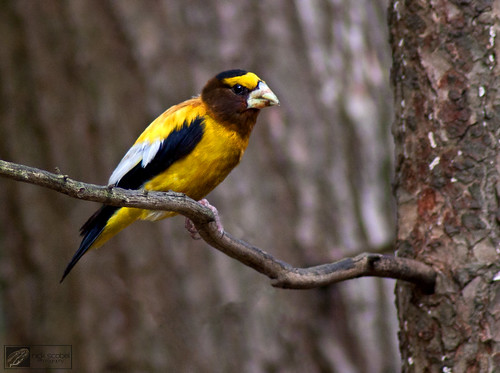 The drier months of the summer really slowed down any herp movement at all, only bringing about the occasional garter snake. I did happen to find this unmarked turtle, which was out for a stroll after a strong passing thunderstorm in early August.

As the weather has begun to cool off here later in the season, there has been a noticeable spike in snake activity. One morning, after a night of heavy rain, I came around a corner and couldn't miss this beautiful snake in the road. 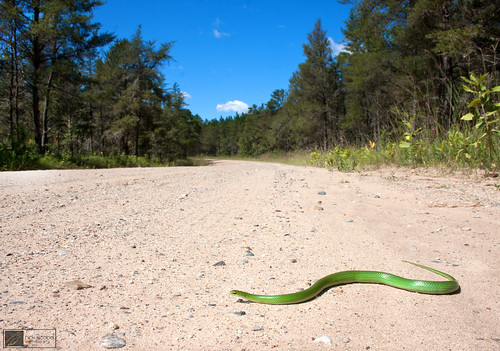 I don't often get to see greens, so anytime one shows up it's a treat. The month of September was pretty slow at first, but by the temps began to cool about midway through the month, snakes became a daily encounter along forest roads. 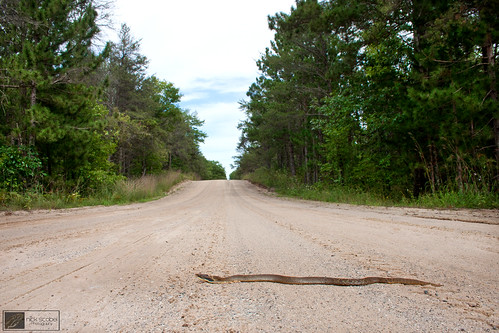 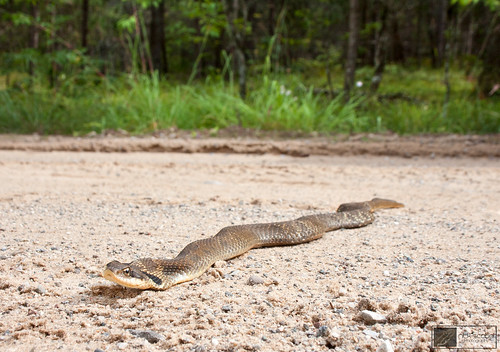 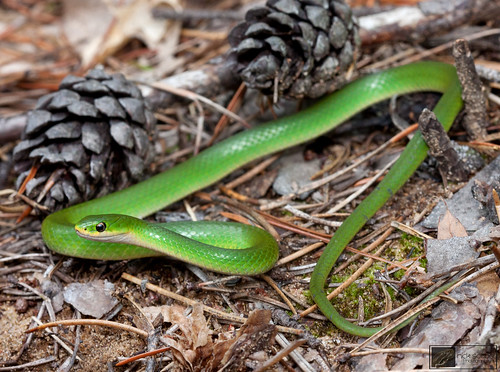