It's nearing the end of March and usually I'm still awaiting the arrival of the spring rains to bring out the waves of amphibians in the Michigan woodlands. However, this spring things have been a bit different. I arrived back from my spring break trip to Florida on Saturday, March 14th. As my plane landed at 6:30PM, I was greeted with temperatures in the 40s and heavy rain. Before I knew it I was heading out to a new site with a herpetologist to search for a rare Michigan amphibian. The pool we surveyed that night and the following morning was not in the typical upand deciduous forest I'm used to. This pool was located in a lowland flatwood forest dominated by Oaks and the ice hadn't completely thawed in the pool just yet. 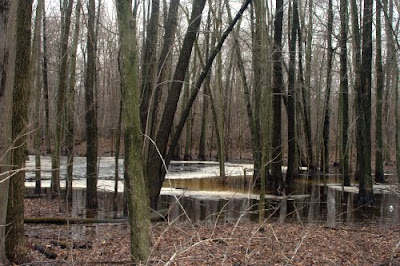 The one species in particular we were interested in was the Smallmouth Salamander. This is a very common species throughout its range, but Michigan lies at its northern range limit. This fact coupled with pollution, development, and other factors has left only a handful of breeding populations left in the state. In fact, the Smallmouth Salamander is listed as Endangered by the Michigan Department of Natural Resources. We were lucky enough to find more than a dozen individuals during the night and the next morning, these were my first Smallmouths in Michigan, a real treat. Smallmouth Salamander - Ambystoma texanum
Smallmouths and Tigers are amongst the earliest of the salamanders to emerge in Michigan every spring, often moving while most of the pools are still iced over except for the edges. A week or two later as the ponds thaw and the rains come again, a few more species also emerge on rainy nights. This vernal pool is a site I've visited for several years now and it amazes me the amount of amphibian this pool holds in the spring despite being nestled in an extremely developed area. On a few night outings and trapping sessions at this site, I was able to encounter quite a few of the different salamander species found here. It's a place that I just have to visit each and every spring. So without further adeu, here's the animals. Spotted Salamander - Ambystoma maculatum
As I sit here in my room up at CMU and stare out into the dry evening, I envy the rain that sweeps across the southern half of the state and once again avoids mid-Michigan. However, finding this beast today was well worth trudging through the rain in southeast Michigan. The King of the Southeastern Pinelands

I recently had my spring break trip to the great state of Florida. My first destination of the trip was a tract of pine flatwoods in Polk County. In the past I've seen a great number of species in the area and it has proven to be a productive area. The main target of my trip as always was the king of the southeastern pinelands, the Eastern Diamondback Rattlesnake. Things during the first half of the week were quite slow in central Florida, as temperatures held in the low 60s and got into the low 40s and high 30s at night. On Wednesday, my cousin Robbie and I headed out for a three day trip to southern Florida. Temps were much more favorable and it proved to be productive right away as we found this beauty out and about just after dark. Corn Snake - Pantherophis guttatus
There were also several species of Nerodia out and about on the roads, the coolest of which we saw was this small Florida Green. Florida Green Water Snake - Nerodia floridana
There's never a shortage of these pit vipers in Florida, this one was particularly set in showing its namesake. Florida Cottonmouth - Agkistrodon piscivorus conanti
Later on in the night, I finally broke on a curse of a snake that I had only seen in the form of a DOR. This beautiful rat was found 200 yards up the road from a huge corn snake at around 12:30 AM. Yellow Rat Snake - Pantherophis quadrivittatus
Things eventually began to slow down on the roads, and seeing snakes every five minutes turns into a snake once every half hour. At 2:30 AM, we noticed a large shape on the edge of a roadway and U-turned to find this beautiful serpent out and about on a dry night, which is odd for the species. Eastern Mud Snake - Farancia abacura abacura
The next morning we arose around 10 AM and headed out to get some breakfast. At around 11 AM the sun broke out from behind the clouds and the temps climbes into the low 80s. As we rounded a corner my cousin questioned, "Whats that ahead in the road?" I looked up to see a dark shape several hundred yards ahead in the road, the closer we got the more it looked serpentine. And once we realized what it was, we both couldn't believe our eyes. A three foot Eastern Diamondback Rattlesnake layed out in the road right ahead of us. We jumped out and began a long anticipated photography session with this beast, words can't describe how excited I was to see this species of snake. Eastern Diamondback Rattlesnake - Crotalus adamanteus
An amazing species of snake that finally made an appearance...
Posted by Nick Scobel at 1:57 AM 1 comment: